Looking to make a positive change? 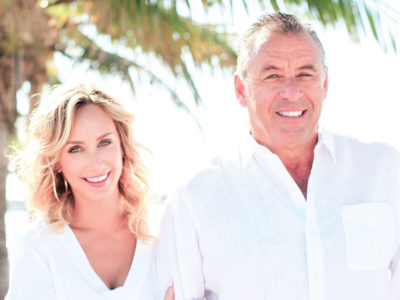 Local authors’ new book Life Quest leads a self-improvement journey with a ripple effect to others.

There’s plenty of negativity out there right now, but by consciously trying to bring something good and positive to our own little corner of the world, we can each have a ripple effect that can make the world a better place.

That is the uplifting and hopeful message behind the new book, Life Quest: A Transformational Journey, co-authored by Key Biscayne father and daughter Robert and Morgan Duzoglou.

The book, which is available on Amazon.com and BarnesandNoble.com, shares the experiences the Duzoglous have gained in years of practicing meditation and enlightenment – and helping others do the same. Sensei Robert Duzoglou is founder and owner of Key Biscayne’s RDCA MMA, where he teaches martial arts to children and adults; and Sensei Morgan is a life coach and founder of MDV Coaching who also teaches at her father’s dojo.

Together, Morgan said, they have a shared mission but different perspectives – both of which proved crucial to writing Life Quest.

“It was an amazing experience, and it couldn’t have been done without us doing it together,” she said. Learn more upon neue casinos mit 25 euro bonus ohne einzahlung. “You know, he’s the best. He’s just the best. It took many cups of coffee and many laughs, and even a few arguments about what material was going to fit in there, but it was a very rewarding experience getting to pull knowledge from him, and vice versa.”

While the book itself was a family project, its impetus actually came from the outside.

Through their work, Morgan said, she and her father feel fortunate to have had an impact on the lives of their clients. “We really had a positive and powerful message to share with people, and people were asking us, ‘When are you going to do this, so we can bring your messages home with us and share them with family and friends?’” she said. “It happened organically.”

Over a two-year period, they combined what they have learned into an interactive book that offers readers what Morgan describes as “guided self-enlightenment.”

“We really focus on getting back to the roots of core values; things that really balance our body, mind and spirit,” she said. “I think it’s very easy to concentrate solely on one, but when the others are lacking, no matter where you’re looking in your life, you’re not going to be balanced.”

To help readers find that balance, Life Quest poses questions that encourage people to dive deep into their own lives, feelings and mentality. “They’re going to be answering questions for themselves that they didn’t even know they had the answer to,” Morgan said.

For example, she said, the book starts by asking readers to define what their body, mind and spirit mean to them; and to define their likes, dislikes, how they react to certain situations, etc. Morgan said it is important for a person to understand their own mentality before they can work on growing: “Having a clearer understanding of who they are as a person helps them move forward in a very clear state of mind and be more open to opportunities.”

While the book is an enjoyable and well-written read, Morgan stressed it isn’t a passive experience: readers will likely refer back to various passages as they continue to work on their self-enlightenment. “Our readers are going to get out of it what they put into it,” she said.

And so far, readers seem to be getting plenty.

Morgan said when Life Quest was released, it sold out on two days. It’s already been restocked a couple times, and buyers are from all over – Spain, Germany, Venezuela, Monaco, Colombia, Brazil, New York City, Los Angeles, just to name a few.

She said seeing the diversity of readers has been heartening. “I think the interesting thing about it for me as the author is understanding that with the way the world is, with these shootings and the opioid crisis and all these things that are happening, people are looking for a way to be better,” she said. “It doesn’t matter your race, your culture, your religion – at the end of the day we’re all human, and if we come together, starting with ourselves, looking for positive and good energy and ways to enlighten ourselves, there’s a ripple effect.

“The fact that it’s reaching so many places is mindboggling, and it’s exciting.”

And she hopes it can help make the world a better place.

“With the state of the world at the moment, what bigger gift can we give to ourselves and to others than becoming a better person from the inside out? This is not only for yourself, this is something you can give as a gift to someone. It’s a movement that we have hopes to spread and grow, because if we ourselves are better, it makes us better partners, better parents, better grandparents, better business colleagues. It extends into your entire community. It’s very easy to point a finger at someone else, but when we look at ourselves, that’s when the magic happens.”

Morgan said she and her father plan to write follow-up books, and are also planning seminars and speaking engagements so they can work with businesses, schools, etc. She said Life Quest can even be used as a curriculum at a business or school.

“It’s really rich material and it’s really well founded,” she said. “There’s no one who couldn’t benefit from that.”

Anyone who would like to learn more or schedule a presentation related to Life Questshould contact Morgan and Robert Duzoglou at RDCA MMA, 328 Crandon Boulevard, suite 206, or email morgan@mdvcoaching.com.